Homework!!! In San Pedro!! You kiddin’ me?? More about that later on.

Got off to a good start today with a tour of some coffee fields high in the mountains just outside of San Pedro. Seems my host owns a small piece of land up there and grows his own coffee beans to sell to the local market. In fact there are no plantations around this area but almost all the Mayan families have some plots of land and they run a sort of co-operative in the local coffee business. The local Mayans own the land and most pick the coffee themselves and sell it to the local ” factory”. Some coffee has already started to ripen but the main harvest is in December.

There are three types of coffer. First is the cheap stuff. They take the entire fruit and seeds and dry them out and then roast them. This gives more coffee but with a very different taste. Then there is the mid range coffee which is when the external fruit has

Dark ones are the dried fruit and bean, middle ones are the beans with shells and the one in front has had the shell removed.

been peeled off and all that remains is the seeds which we are more used to seeing. They then dry and roast those seeds. Then there is the best grade, called ” Oro”, or gold. This is when the shells on the seeds are taken off and you are only left with a soft interior part of the seed.  ” Oro” is then broken down into three classes. All depending on the height of where the coffee was grown. The highest beans grown in the coldest conditions are the best grade then go down as altitudes drop. It was very fascinating to see all this.

The coffee is then picked by hand, mostly by the owners and their families, then brought to the local processing plant which is super small. They do not export or sell any of their crops externally. Everything is Atitlan planted, grown, processed and sold. It has it’s own very unique and desirable flavor. The The local processing plant is super small. One tiny building operation. The beans are then sorted on the floor and allowed to dry.

They are then ” processed”, meaning one person sitting with a mound of seeds in front of him goes through them by hand and picks out all the undesirable seeds. They are then roasted in a ten by ten roasting machine which I will be able to see tomorrow morning as he had not yet finished sorting the new bunch of seeds.

Then it was off the to best part. Taste testing. mmmmm. Best coffee I have ever had. I kid you not. I am by no means in any shape or form a person that knows my coffee. In fact at home I buy what is the cheapest. It’s just basically for the morning spike. However, this stuff. Well I knew I was tasting what real coffee is supposed to taste like.

One other treat about the tour this morning is I finally got to dredge my way through the jungle and check out all sorts of awesome plants and insect life. It wasn’t dense and lots of trails cut through it for people to pick the coffee which is just planted in the dense areas. This was  great treat all on it’s own, I just wished I had brought my bug spray. LOL> We took a tuk tuk by road about 30 minutes outside of town straight up a hill. At times I thought we would need to get out and push the tuk tuk and it was seeming to struggle it’s way up the mountain side. Once there we opted to hiked down the mountain side back into town. Some really breath taking views.

On the way down the paths made by locals to access their crops, more easily, I hear this hammering sound. It was a one man team hand cutting rocks out of the side of a cliff with a hammer and chisel. I couldn’t believe it. Not something you would see anywhere in North America unless it was prison run and even then……

So he breaks off large pieces of the side of the mountain then starts to cut these big pieces down into rough pieces about 12 inches square. There was a pile of a few hundred he had already cut. Some take days to cut just one piece. Then he sells his wares for the roads or people wanting to use them to build instead of using bricks. If you have read some previous post you noticed I mentioned a few times about the rough cobble stone roads. After seeing this and then reaching the streets I noticed all the chisel marks in the stones underfoot. Wow. A road really built all from hand. Not a machine to be seen.

I began my Spanish lessons today. Two things I really lack. Even though I am partially conversation at this point to a very limited degree. I have been dependent on my French and Portuguese background to get as far as I have. Thus my Spanish is more like ” “Spanrenchtuguease. I wasn’t even aware how to count properly in Spanish or pronounce the alphabet properly. Though I use a bashed up version and am able to make myself understand and understand but I wanted to get those down first. Even though my teacher, who spoke very little English, which was good for me cause everything was in Spanish, with the occasional help of a Spanish English dictionary, wanted to start of with verbs. I asked if we go one step back to the super basics. I was glad cause boy was I bashing the language something bad. LOL. I’m sure we will spend more time on those basics later on. After an hour so of the ABC’s and 123’s we got more into the verbs and masculine and feminine words. We don’t need masculine or feminine in English. However, it is crucial to learn the masculine and feminine. It came rather easy for me as a Portuguese speaker and having learned them before. However, there were still lots of differences. My pronunciation really sucks. Again it is cause of my Portuguese. That language is set in stone in my mind. So I would read and knew exactly what I was reading  but saying it. Another story. Have a long way to go on that. The best part was the end where we just chatted for a good hour putting into practice what I had just learnt. Even though I knew what I wanted to say it just would not come out right, ( still need to undo the Spanrenchuguese but thus the point of the lessons. To learn. Just as the lesson was wrapping up she pulls out some homework!!. Dang was not expecting that. But certainly helped to instill the verb tenses. Homework on the road. hummmmmm!!!!

Before I finish, I will share a few images and thoughts on the ” moon rise” last night. It was the first clear night here since I’ve been here. The mountains surrounding the Lake raise over 3,500 meters or 10,000 feet in some areas. 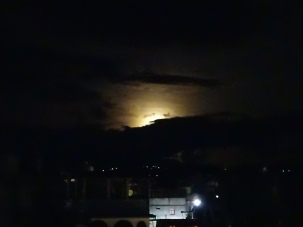 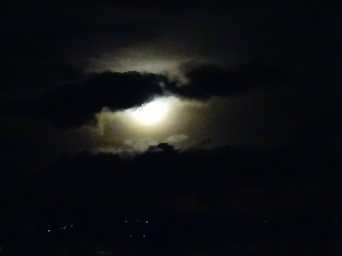 not set. Not so much here. I noticed a huge glow off across the Lake. At first I had no idea, I thought ” ghess am I going to be able to write a story about a volcano erupting” Nope. It was the moon, coming up fast. It only took less than 5 minutes for the full moon to be high above the mountains but to see it rising was breath taking. Again words and photos can do it no justice. But it was just ‘ Gooooooooooooooooooooooaaaaaaaaaaaaaaaaaaalllllllllllllll  exciting to watch.

Spent a very lazy Sunday enjoying the town, the people, and the culture, as well as just spending a lazy …

So this is going to be my first blog on here for many a year. I’ve been avoiding it cause …

In 2011 I had a fairly serious bike accident. However, I have always counted myself blessed to still be here …

It’s official Ladies and Gents and everyone in between. This Summer at the annual Horizons Unlimited meet in Bracebridge  ON, …

I like keeping this blog pretty much motorcycle related. It is, after all, the main reason most of you have …

That first night at DaMurph’s was phenomenal. First bed in three days with a hot shower and a full belly. …

So finally heard from one of my readers  ” Hey, how come you stopped writing about your trip”. Well seems …

There are only two ways of getting to P.E.I  with a vehicle. The 11 km long Confederation Bridge bridge that …

Yesterday, I met the nicest young couple at a local motorcycle garage. Both are travelling across Canada with next to …

Sometimes in life the simplest reason to explain why you are about to do something is simply “because”. That is …

Less than a week away. Stay tuned for more details.  Trans Labrador highway plus much more.

Some months ago a friend got a great idea. He wanted to travel around Ontario and visit some abandoned buildings. …

I recently purchased a new Carbon Fiber helmet. It is the most amazingly light helmet with a great look and …

A nice Sunday drive in the country can mean a lot of things to a lot of people. Some like …

We bikers have a lot of urban lingo we like to use to describe things. One of our favourites, especially …

This post would be far more difficult for Michael Fritz to write so I am posting this on his behalf. …

I woke up this morning and received a rather large file from Mike Fritz. When I opened the file it …

I came across a this great read with a fountain of knowledge of travellers who have gone before. Have to …

Tents can be pretty bulky. So thought to save a little room I would try out a hammock and see …

What is adventure riding? One could say that everyday riding a motorcycle is an adventure and I would never argue …

Was able to spend an enlightening day with Jeff Luttmer on Saturday. A fellow Adventure Rider who spent 2013/2014 riding …

Like with most strenuous adventures, one has to properly prepare. Since Mike is recovering from his last leg operation he …

Back in my 20’s I had just returned from an extended stay in South America. Previous to that trip, a …

Just finished my third revision of my trip. I’m sure there will be many more as I continue to plan. …

For many years, there was this break in the Pan American highway called the Darién Gap which was never developed …

Post by Peter Sanderson – http://www.ridingaventures.ca My brother-in-law posted a recipe for deep-fried mars bars served with ice cream and …

So, maybe it is very early on to be “packing” already. However, my thinking on this is that it is …

Written by: Peter Sanderson, Blogger (www.ridingadventures.ca) – December 31, 2014 An outside look at Michael Fritz from V-Strom Adventures The BIG …

Welcome to my first blog, ever!  I’m not, by any means, a very affluent writer.  I’m a little on the dyslexic …

Select a Month to View Blog